Book: Dead, Insane or in Jail: A CEDU Memoir 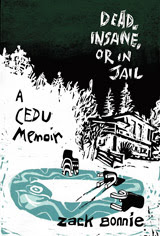 This book by Zack Bonnie tells the story about how to be forced to attend a CEDU bording school.

All the CEDU schools closed around 2005 after a number of lawsuits were issued by parents and former students.

Also several students disappeared never to be found again. Some of the children were most likely murdered by a serial killer James Lee Crummel who had unrestricted accesss to one of the campuses. To this day there are families out there looking for their relatives.

CEDU was founded in 1967 by an owner of a furniture business, who after a brief stint at Synanon created the first school in California where the main tool for transforming the children into the products their parents ordered were attack therapy.

The founder died in 2002. The school were sold but closed only some few years later due to the lawsuits.

The book provides a good insight into how it was to be a student in these special schools. After the original schools closed the concept were transferred into other schools where some are open even today.